Hopefully you are lucky and you have supportive family and friends around you who will help you to keep a grip on reality.

But if you are not so lucky; PSYCHOSIS is a severe mental disorder in which thought and emotions are so impaired that contact is lost with external and objective reality.  It is often caused by major life events that put the person under prolonged and intense stress such as family breakups, bereavement, loss of employment, violence and abuse, etc.

While we were making these masks we talked openly and honestly about how it feels when boundaries between realities blur. Here are some extracts:

“The cards I was dealt left me with so many unanswered questions.  Is the joke on me or am I the joker?  Does the joker play tricks or is he a joke himself?  Is it just all by chance or a grotesque distortion?”

“I was so stressed out and I wasn’t able to sleep properly anymore. My life became a 24hour nightmare where reality and dreaming blurred into one.  And none of it was good!”

“I couldn’t get out of the situation.  I was stuck in a nightmare that just wouldn’t stop.  Everything became unreal and I started seeing things. Or did I?  How can you tell what’s real and what isn’t?”

“I was on edge, on the brink, on the line between daytime horror and dark nightmares.  How can you tell when you leave this reality and slip headlong into another nightmare? It doesn’t feel that much different.”

“I was so tense and stressed.  I started to have visions and they seemed as real as you and me.  I didn’t know and there was no way for me to know what was real and what wasn’t.  But did it matter?  There was no escape from either realities.”

“Crossing the line just happens and I’m not sure how I find my way back.  Actually, the other reality can sometimes be nice: sparkling lights, iridescent bubbles, beautiful dragons, loved ones are alive again, pretty colourful things…”

Seeing a giant headless Santa Claus may seem quite funny in hindsight but psychotic episodes are mostly extremely frightening.

“I was so stressed after a very messy divorce I was seeing things but I thought that they were real.   I was seeing dead people and I thought I could talk to ghosts.  I thought I had a connection with the spirit world, that I was psychic.”

“I can see faces of people who have done horrible things to others, I become a part of this horror film.  People wear masks to hide behind, anything could be behind there.  ‘It’ could suck you in or ‘it’ could come at you.  The eyes will give it away.”

At Arty-Folks we are a community who trust each other to talk openly about our feelings and experiences which can prevent stress from building up to such extremes. Talking about how we feel can literally make the difference between life or death: While struggling with their first psychotic episode 18.4% attempt to end their lives.

“It can last for days.  It can last just hours.  I don’t know how, where and when it will happen.  Friends and family help me through this nightmare. They distract me. They give me time and space to fight my way out of it. They help me with ‘reality checking’ and help me put my fragmented life back together.”

If you think you might be struggling with a sense of reality go and see your GP first. Then come to Arty-Folks and we will support you in any way we can.

Previous Story
Arty-Folks celebrating 20th Birthday!
Next Story
B.H. “I will just ride it out! 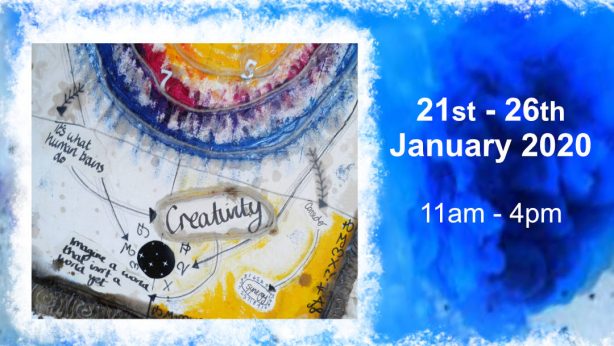 21-26 January at Blue Door Gallery in Earlsdon, Coventry An... 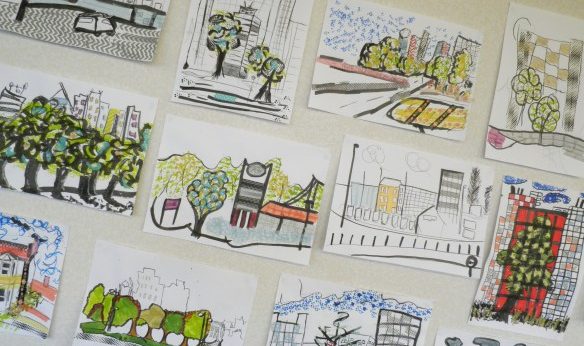